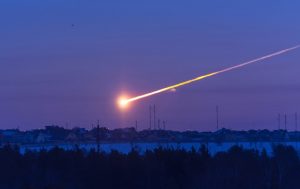 Everybody knows that the ionized trail of a falling meteor can reflect radio and television signals. Yes, it’s technically more accurate to label it a process of refraction rather than reflection, but regardless of what you call it, the signal bending/bouncing effect is well understood.

Amateur radio operators (Hams) pioneered the ‘forward scatter’ meteor communication pathways decades ago. These days various corporate, governmental, and military services have learned to use the ever present meteor trails as a means of relaying data between distant locations in an efficient, reliable, and secure manner.

Until recently, however, no one knew that a meteor could actually generate its own radio emissions at decameter wavelengths – the frequencies in and near the familiar short wave radio band.

In 2014, after analyzing some 11,000 hours of data collected by the Long Wavelength Array (LWA1) radio telescope in New Mexico, UNM grad student Kenneth Obenberger discovered 49 transient radio bursts that defied known explanations. By comparing the times and positions of these radio frequency transients with data from NASA’s All Sky Fireball Network cameras in southern New Mexico, Obenberger and his colleagues determined that at least 10 of the transients coincided with optically observed fireballs (exceptionally bright meteors.)

In a search of  the data for radio transients, we have found 49 long (10s of seconds) duration transients. Ten of these transients correlate both spatially and temporally with large meteors (fireballs), and their signatures suggest that fireballs emit a previously undiscovered low frequency, non-thermal pulse. This emission provides a new probe into the physics of meteors and identifies a new form of naturally occurring radio transient foreground.

The fact that only 10 of the 49 transients were definitely confirmed to be meteor related is most likely due to the inherent limitations of NASA’s Fireball Network. Their ground-based cameras can’t ‘see’ as much of the sky as the Long Wave Array’s antenna-receiver system, and unlike the radio telescope, an all-sky camera’s capabilities are hampered by both clouds and the light of day. Therefore it is quite possible, even probable, that all 49 of the mysterious transients were, in fact, associated with meteor activity.

As further support of the radio burst / meteor relationship, the graphic below illustrates how well Obenberger’s transients corresponded to periods of active meteor showers during the course of a year:

In his comments on this histogram, published in the Astrophysical Journal article,  Obenberger did not associate the 11 transients observed early in the year with a ‘major’ meteor shower, speculating instead that the LWA1 had discovered a previously unknown fireball stream. The Multiverse Today would like to point out that the Quadrantids shower is active in early January, and according to the American Meteor Society it “can often produce bright fireballs.” A minor shower called the Delta Cancrids is also active throughout January. Therefore it doesn’t seem surprising to us that a cluster of radio emissions from meteors might have been observed during the first four weeks of the year.

In the discussion section of his research paper Obenberger concludes:

Given the vast range in energies and size scales of meteors and their corresponding plasma trails, this emission may exist at a wide range of frequencies, timescales, and energies. Investigating this emission further will yield new insights into the physics of meteors and their interaction with our atmosphere. Moreover, fireballs are now a known radio transient foreground source and need to be taken into account when searching for cosmic transients.

The Multiverse Today will present more about this fascinating discovery in a future article, along with suggestions for hobbyists who might like to try their luck at observing the radio bursts from meteors.

The full text of ‘Detection of Radio Emission From Fireballs’ by K.S. Obenberger, et al, is available here.